Shrewsbury, a medieval town on the banks of the river Severn. Higgledy-piggledy streets with names you want to say out loud - Bear Steps, Wyle Cop and Grope Lane. A river that scoops up the town in a loop. Two bridges, each with a different nationality. Wonky buildings left, right and centre. Bread, still warm, made with flour from a water mill a few miles away. Mick Jagger and Margaret Thatcher watching from a 1500's building. A blockbuster in a Tudor cinema. The world's tallest town crier. 921 years of wine buffs.

Charles Darwin was born in the town and went to Shrewsbury School which was then housed in the library buildings. Follow the Darwin Trail around town. Look out for the Quantum Leap sculpture on the riverbank opposite the Theatre which was created to mark Darwin's 200th birthday.

Founded in 1083, the Shrewsbury Abbey was once the centre of Norman and Medieval power in the region as well as the centre of a daily prayer, study and work for a community of monks. It's still a place of worship today and well worth a visit.

From the red sandstone castle walls, you'll see why Shrewsbury Castle was once a place to guard the town. Inside the walls lies the Museum of the Shropshire Regiments, which is dedicated to the King's Shropshire Light Infantry.

Established in the 16th Century The Quarry Park must be one of the oldest picnic areas in the country.

The Quarry is a beautiful, 29-acre parkland set right by the River Severn in the heart of Shrewsbury. It used to be a rough place, with tanneries, stone being dug and women doing their washing. However, the gentlefolk of Shrewsbury were having none of it though and decided to create a riverside promenade for their refined Regency ladies. Today it is used for that same purpose and is a perfect place to relax, walk and picnic.

The Dingle is a sunken garden designed by Percy Thrower – Shrewsbury’s Parks Superintendent for 28 years. It is a floral haven all year round and the crowning glory in Shrewsbury’s annual bid to be a Britain in Bloom champion – an accolade it has won several times. Throughout the year there are a host of events taking place in the Quarry, including the renowned Shrewsbury Flower Show each August.

The longest uninterrupted run of independent businesses in the country. You can shop independently for everything you need, household goods, fashion, food, fine dining, boutique hotels and bed and breakfast, fine art, fine wine and whiskey. There is plenty to see for everyone.

Shrewsbury is a 3 - 4 hour drive from London, an hour on the train from Manchester and Birmingham so whether you visit for the day, or the weekend, you won't be disappointed. 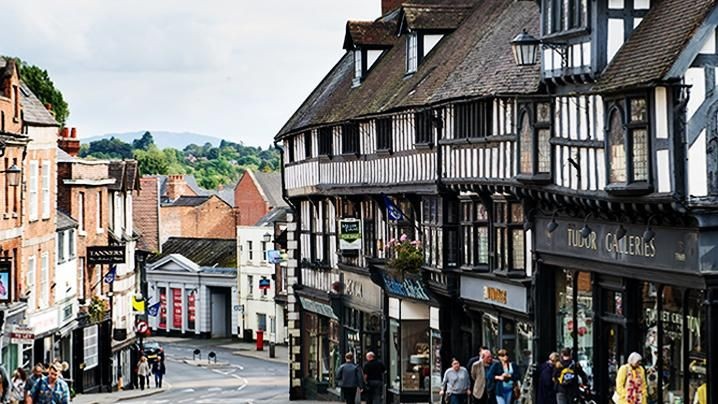